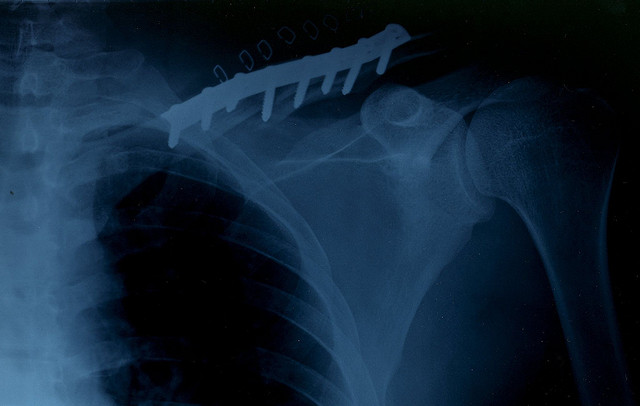 About a month ago, I broke my collar bone while doing the Old Man Winter Bike Rally. Couldn’t have happened at a worse time, the beginning of the training season for me. It may have slowed me down, but it hasn’t stopped me.

I was going 20+ mph down a hill on a flood damaged road. I saw some potholes but I was going too fast to avoid them. I didn’t realize how deep they were until it was too late. I got launched. I remember that feeling of “this is going to be bad” while airborne. When I got up and checked myself over, I found that I was right.

Luckily, with the number of cyclists and skiers here in Boulder, a broken collar bone is just another day at the office for ER doctors and orthopedic surgeons. They had seen it all before, knew exactly what it was going to take to fix it, and had me on the road to recovery.

As an endurance athlete and software developer, I wasn’t too thrilled about the idea of wearing a sling on my dominant arm for weeks while my collar bone healed. Turns out, I broke my bone in seven pieces, so surgery wasn’t an option. It was required if I wanted my bone to heal right.

A week and a half after surgery, I was back on the indoor trainer. A few days later, my doctor officially cleared me for indoor training. He said I would have to wait another month before I could do anything outdoors because if I were to fall and break it again, it could cause irreparable damage. He also mentioned that I wouldn’t be able to swim for awhile. (I think I cheered a little on the inside when hearing that.) So, no triathlons for me this year, but I will be able to do some cycling road races, duathlons, and try my luck at cyclo-cross again.

Back in the saddle (pun intended)

The ten days off took a toll on my fitness. According to TrainingPeaks. my CTL (chronic training load) fell ten points. I’ve slowly been gaining it back. I’ll ramp up my training soon and should be back to where I was before the crash. If everything goes well, I’ll be able to get my CTL where I want it prior to the start of the road cycling season.

My shoulder is a little stiff and I probably won’t be winning any sexiest collar bone contests anytime soon, but I’m glad I went through with the surgery. Being able to continue training less than two weeks after breaking my collar bone is amazing. Plus, that sling was getting stinky and uncomfortable after two days, I couldn’t imagine spending six weeks in it.

Take it out or leave it in?

Broken collar bones aren’t rare in my office. After talking to some co-workers, I’ve learned that there is no definite answer for whether or not to remove the metal after the bone is healed. Some co-workers still have theirs, some don’t. The reasons vary for both sides. I’m not really sure what is right or wrong, but my doctor told me that I should have it removed at the end of the year. He said if I kept it in and fell hard on it again that the bone would break on the end of where the metal is and that part of the bone is much harder to repair. In addition to that, I’m pretty thin so the screws and metal are going to be visible and be irritated by seat belts, backpack straps, etc. Sounds like good enough reasons for me to have it removed.

The X-ray image above isn’t mine, but it looks very similar. Eight screws and some wire to hold it all together. I wasn’t lucky enough to get a digital version of mine, so photo credit goes to Andy Nelson for sharing his on Flickr.