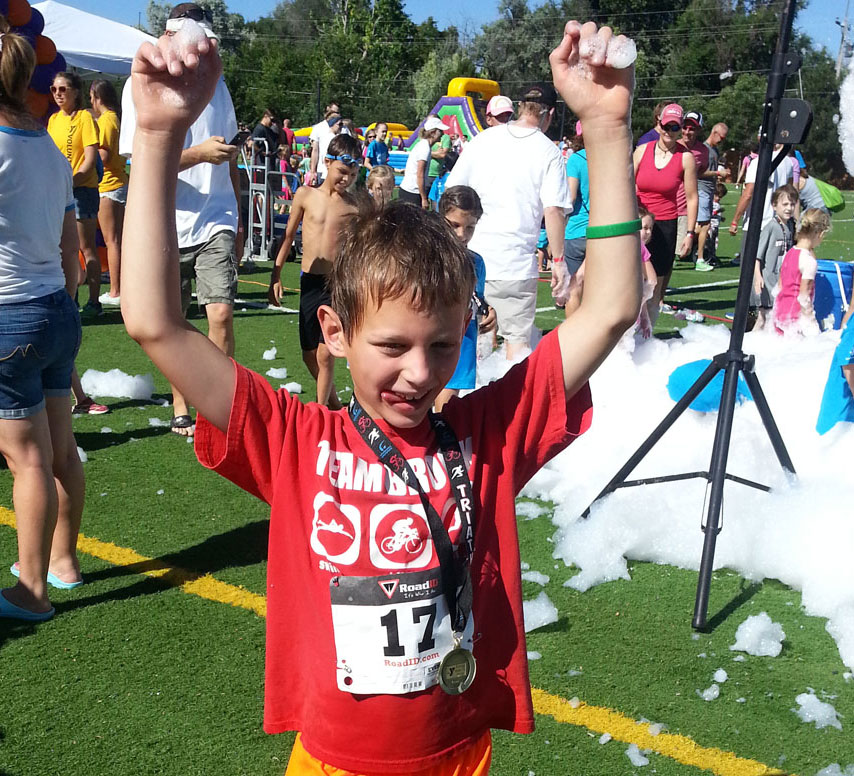 If you find your kids playing dress-up with swim caps and aero helmets, it may be time to register them for a triathlon. With the sport of triathlon growing the way it is, not only are we seeing more races, but we’re seeing races that cater to kids. These races are a great way to introduce your little ones to the sport of triathlon. My kids were so excited to “be just like daddy and mommy” when they participated in their first triathlon. Of course, I was just as excited as they were that they wanted to get into the sport. It’s hard not to get carried away, so I thought I’d share some things I’ve learned from coaching youth sports and getting my kids involved in the sport.

It may be your kid’s first race or their tenth, either way, there is plenty they can learn. Use this opportunity to educate them. For example, you can teach them more about the sport, sportsmanship, competition, etc. Instead of setting up their transition area for them and telling them what to do, let them set their transition area up. It’ll give them a chance to think about the logistics and problem solve. If something is blatantly wrong, then jump in and coach them.

It’s also a great time to teach them about sportsmanship and competition. I wouldn’t focus on the competition aspect. In fact, many of the kids races aren’t timed. But, I believe some competition is healthy, even if it is competing against themselves. Some kids are afraid to perform at their best because they have a fear of failing. It’s okay to fail, doing so teaches us something. Your job as the parent/coach is to help them learn from their failures.

It’s not the Olympic tryouts. Every kid’s race I go to I see the hardcore parents. The ones dressed as if they are competing themselves, their kid’s transition areas resemble an elite athletes’s at an Ironman race, and they are constantly bombarding their kids with instruction. You’ll see the overly serious parents in almost every kid’s sport. I like to compare this to reading at school age. How much did you like reading when you were forced to read in school vs. reading on your own? If you were like me, when I was forced to read a book, I was turned off immediately.

Treat your kids’ interest in the sport like a seed. Nurture it and let it grow. Don’t dump a fifty pound bag of fertilizer and sixty gallons of water on it and expect to be pushing up prize winning roses. You don’t want to burn your kids out on the sport, especially if it’s one you enjoy and want them to take an interest in. Keep it light and fun. Enjoy the time you are spending together bonding over a common activity. If they continue show interest and are talented at an older age, then begin to pursue the serious side of it.

Kids don’t react to negative feedback. After the race don’t run down a list of all the things they did wrong. Give them praise for what they did well. If there are things they need to work on make it a learning opportunity and give them a chance to think about it instead of telling them what to do. For example, you could say “Hey, I noticed you weren’t kicking very much with your feet during the swim. Do you think it would make you a faster swimmer if you had been kicking?”

There’s nothing better than watching your kids, or any kid, cross the finish line of a race with a gigantic smile on their face. Let’s do our best to keep them smiling and grow our sport.