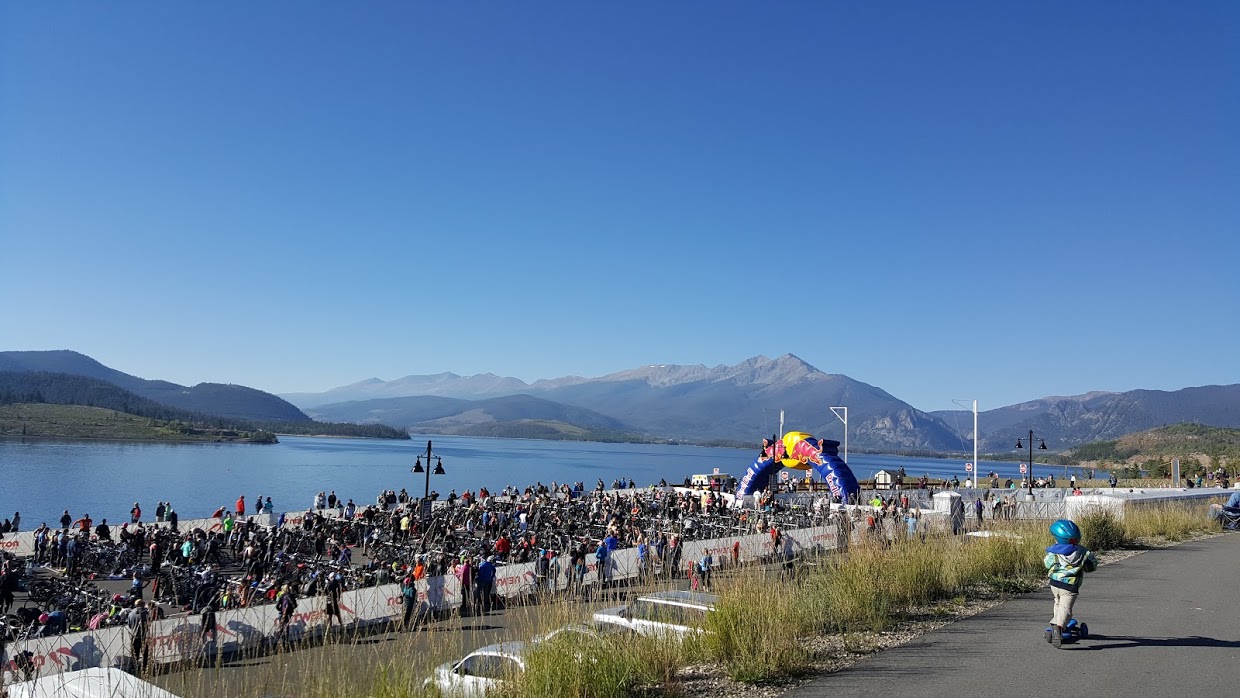 On September 10th, I participated in the first ever 106 West Triathlon, held in Dillon, Colorado. Starting at 9,087 feet above sea level and topping out at 10,291, the 106 West Triathlon holds the honor of being the highest triathlon in the world.

I was out for an adventure and a challenge and the race did not disappoint. Both quarter and half distances were offered. Unable to resist a challenge, I went for the half distance. Below, is a write-up about my experience during the race. 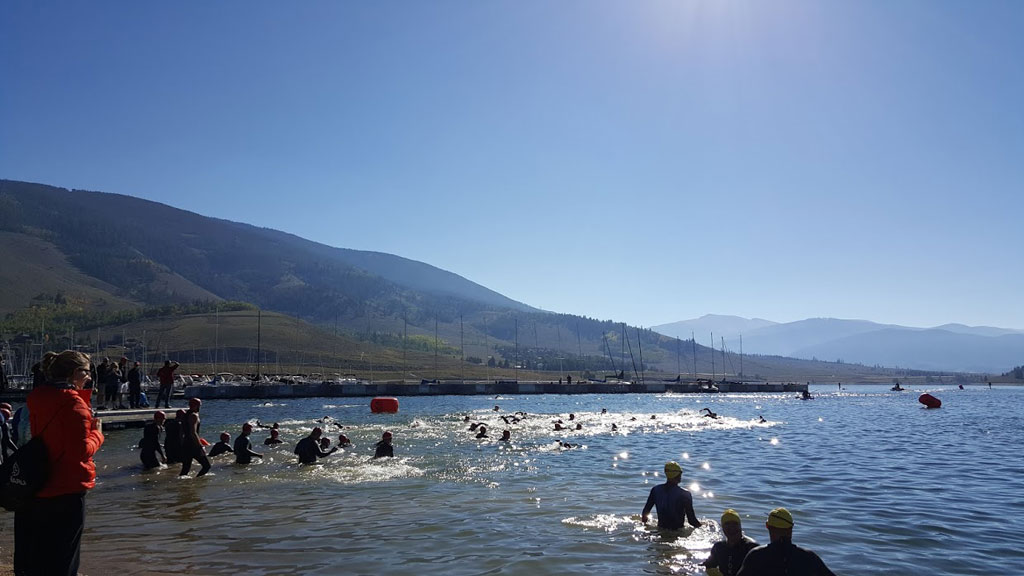 For the first time ever, people were allowed to swim in Lake Dillon. Hearing all sorts of buzz about how cold it was going to be, I was a bit nervous prior to the start of the race. Erroring on the warm side, I decided to purchase a neoprene cap and neoprene swim socks a week before the race.

I’m glad I got the extra gear because it was COLD!! They reported various water temperatures ranging from 58F to 60F, which wasn’t cold enough to make gloves legal, but colder than anything I’ve competed in before. Being the coldest swim I’ve ever done, I had some issues. The shock of the cold water when my face was immersed cause me to hyperventilate. This made for a miserable first 5-10 minutes. I was ready to head to the shore and call it quits. When I got to the first buoy, I found a paddle boarder and decided to take a little break, take some deep breaths, and relax a little. After finally calming down, thoughts of quitting vanished, and I was able to swim like normal.

For the half distance race, the swim was two triangular laps. There were plenty of water safety measures in place. Even though I freaked out during, I never felt like I was in danger. The lake was great to swim in. Clear, clean, calm, plenty of room to get out of traffic, and sighting was not an issue (although I was out of practice and almost swam directly into the dock at one point). Wet suit strippers were available when we got out. With cold hands, I certainly took advantage of them.

My Swim on Strava 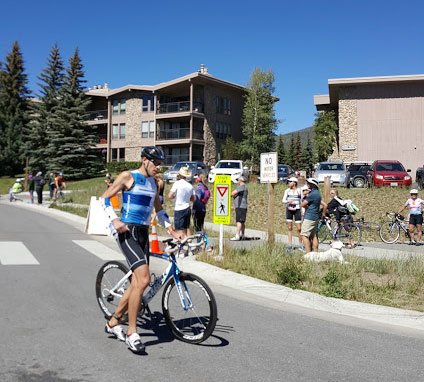 Having had a terrible swim, I was excited to get on the bike and try to make up some ground. The bike course consisted of two, out-and-back laps with over 1,000 feet of climbing per lap. Being from Colorado and climbing quite often, I wasn’t too intimidated by the course, but I was a little unsure of whether or not a tri bike or road bike would be best. After talking to a co-worker who rode the course and doing some similar climbing during my training, I opted to go with my tri bike with Zipp 404’s.

Did I mention the swim was cold? After getting out of the cold water and with the air temperature still being cool, I made sure to take extra time and dry off completely. I also put on a base layer and arm warmers. Arm warmers are great because they’re easy to get on and you can take them off during the bike and stuff them in your jersey pockets if you get warm, which I did on the second lap. I didn’t take advantage of them, but the race setup changing tents for those who wanted a full change after the swim.

For the bike course, the race organizers completely shut down one lane of traffic. I can honestly say, I’ve never felt safer during a race. Racers had plenty of room to maneuver, which was important on the descents when traveling at high speeds. We rode “English style” meaning we rode on the left side of the lane at all times. It was a little weird at first, but it was great because we never had to cross over other bike traffic.

I felt great on the bike and I was happy with my decision to ride my tri bike. The climb wasn’t too bad. The last three miles of it, I was out of aero position and in my “granny gear” but I kept a good cadence and don’t think it was a struggle by any means. I think I bottomed out at 7.5mph towards the top. The descent was nice. On the first lap, I don’t feel like I had to work at all to get back into town. However, for the second lap, the wind decided to pick up and it created a headwind on descent. All I wanted to do was to coast in and begin my run. Nothing sucks worse than having to pedal hard to go downhill. Looking at my data, I went quite a bit slower on the second descent compared to the first.

My Bike on Strava 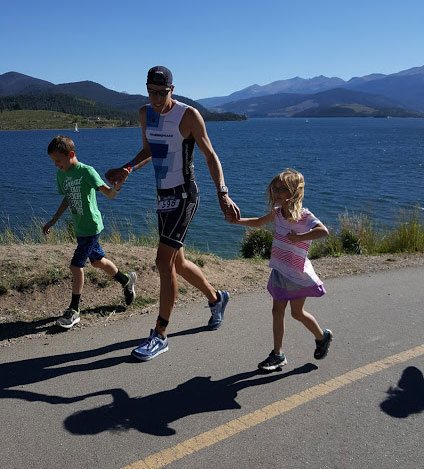 The run course was beautiful. It took place on a bicycle path that runs along Dillon Dam Road. It was pretty tame, consisting of two out and backs with some ups and downs, but nothing significant. As I mentioned earlier, the wind had picked up during my second bike lap. It hadn’t calmed down for the run, so I had to run into a headwind going out, but I had it to my back coming in.

At this point, I think I finally started feeling the effects of the high altitude. When I started running, my breathing didn’t feel quite right. It was almost like I had been doing speed workouts prior to starting. It was definitely harder to catch my breath and that didn’t change for the duration of the run. I just learned to cope with it, slowing down my pace and focusing on moving forward.

There were fully stocked aid stations at the start, in the middle, and at the turn around point of the course. The number of aid stations and distance apart felt fine to me. I was nauseous during a lot of the run, so I wasn’t interested in much food or drink. I forced it down anyways, knowing that my body needed it. Nutrition on the run has always been a struggle for me on longer triathlons. Someday I hope to get that figure out.

The run was uneventful, not too much to report. It was nice getting to see my family between the two laps. My kids ran with me for part of the second lap leading up to the finish. I think that has to be my most favorite triathlon memory and picture of all time.

My Run on Strava

The race was organized by Human Movement Inc. They put on a fantastic event. If there were any issues, I was unaware of them. They put in a lot of hard work into organizing this race, they were very passionate about it, and it showed. I really felt like I was part of something special.

The volunteers, spectators, and police performing traffic control were extremely supportive. Hats off to them and the whole town of Dillon.

If you have the opportunity, I would definitely check this race out. It’s an experience you won’t forget and can’t get anywhere else in the world.

P.S. The Chicken fried chicken at Dillon Dam Brewery is delicious! And so is their Here’s Your Dam IPA.